On the 07:20 train into London for meetings, it is a 1:56 hour journey.  My thought this morning was to take my crochet instead of sleeping through the journey, but I swiftly dismissed the idea…..why?!  I travel into London by train a lot, and not once have I seen anyone crocheting or knitting.

My kids laugh sometimes when I crochet, until I make them something really cool, my husband offend calls me granny, and whilst my parents think it’s clever and they appreciate my makes, I think that they think it’s a bit of an old fashioned thing to do.

There does seem to be a stigma about it or is it just me?  I’m absolutely astounded by the amount of people of a similar age to me that post about crochet on social media, because I did think that it was for the older generation, until I started crocheting! So if I thought that it was for an older generation do other people think that too? Or again is it just me? Why don’t we see more people crocheting in public? Why aren’t there people crocheting on public transport to pass the time?  Would you?

I shouldn’t give a monkeys what people think, I do it for me, and perhaps if more people crocheted in public then it would change the perception of other people, or is it just my perception 😂 all I know is this morning I should of been staring at something similar to this 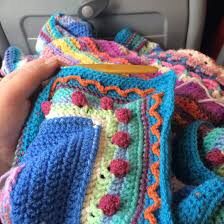 Instead I’m looking at this and blogging

I know which I prefer!!!

14 thoughts on “Crochet on the train……would you?”